This election just got interesting!

Wow... so, was anyone else surprised when McCain didn't pick Mitt Romney? I'd never heard of Sarah Palin before, so after the big announcement today (which was just about fifteen minutes from where I work, by the way- some friends of mine were there), I had to go look up Mrs. Palin. What I've seen so far I like... she's pro-life and she's the mom of five kids, for starters.

I think she looks like a smart choice for McCain- her husband works in oil, and she supports drilling in Alaska. She's young and energetic, which will play nicely in contrast to McCain's "old white guy" image. Palin's children- from the oldest son who is serving in the Army and goes to Iraq in September, to the baby, who has Down's Syndrome- will make people feel like they can relate to her. From what I've read today, it appears that she's made some no-nonsense decisions in office and that she's not afraid to stick to her guns. I'd say that McCain's staffers definitely did their homework in choosing someone who will be able to pull in votes from some of the demographics that McCain is lacking.

I'm really interested to see how things go from here--I wonder if female voters who supported Hillary Clinton will be swayed? Will Americans who oppose Obama for his heritage be any happier with a woman candidate?

All in all, I think that Sarah Palin seems like a great choice, and I think she just added the spark that McCain's campaign had been lacking. I know it's got me a lot more interested in the election already- what about you? 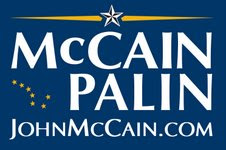 Email ThisBlogThis!Share to TwitterShare to FacebookShare to Pinterest
Labels: News and Views