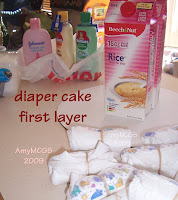 My sister is due with her first baby any day now... it's so exciting! We threw her a shower a few weeks ago, and I made a diaper cake... it served both as a decoration and as my gift to her.

I had seen diaper cakes before and always thought they were cute, but figured they'd be really hard to put together. Wrong! This whole project only took me about an hour. 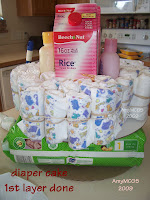 I started by collecting things for the cake for the last few months... using coupons and sales, of course. ;) The cake included two packages of diapers, two boxes of rice cereal, baby lotion, baby bath, plastic links, booties, socks, and a couple of small toys. To put it together, I used two cardboard cake rounds, thin rubber bands, and three receiving blankets. 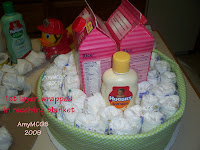 To start, I took all the diapers from one package and rolled them up, then secured with a rubber band. Then, to form a layer, I stood the diapers on end and grouped them together in bunches of 6-7, held together with rubber bands. I placed several of these bundles around the tall cereal boxes to form the first layer of the cake. I used the extra package of diapers to form the base and add height to the cake. After all the diapers were in place, I wrapped a receiving blanket around the whole layer. I secured this with clear bandage tape, but diaper pins would look really cute if you had them! 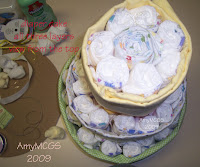 Next, I repeated a layer of diaper bundles directly on top of the first layer. Since my cereal boxes were tall, they served as an anchor between those first two layers-- I simply wrapper the rubber bands around the boxes as I went. I repeated the process one last time to make the top layer. In between the top two layers, I used a rolled-up receiving blanket as the anchor. 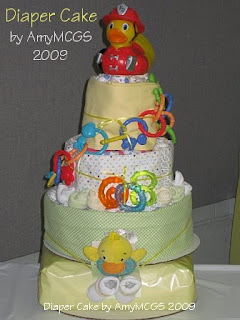 Finally, the fun part- decorating with the cute little baby toys. I pulled up that receiving blanket in the top layer and inserted the big duck (a faucet cover) on top of it to hold the duck in place. The rest of the toys were just tucked in or secured with craft ribbon.
A unique baby gift... that definitely works for me! Check out Works for Me Wednesday for more fun tips!